In December 1774, Benjamin Franklin met Caroline Howe, the sister of British Admiral Richard and General William Howe, in a London drawing-room for “half a dozen Games of Chess.” As Julie Flavell reveals, the games concealed a matter of the utmost diplomatic urgency, a last-ditch attempt to forestall the outbreak of the American War of Independence. Aware that the Howes, both the men and the women, have seemed impenetrable to historians, Flavell investigated the letters of Caroline Howe, which have been overlooked for centuries. Using Caroline’s correspondence and other revelatory documents, Flavell provides a compelling reinterpretation of England’s famous family over four wars, centering on their enigmatic roles in the American Revolution. The Howe Dynasty interweaves action-packed stories of North American military campaigns—including the Battle of Bunker Hill and Long Island—with parlor-room intrigues back in England, creating a riveting narrative and a long overdue reassessment of the entire family. The Howe Dynasty forces us to reimagine the Revolutionary War in ways that would have been previously inconceivable.

READ THE REVIEWS OF THE HOWE DYNASTY

WHEN LONDON WAS CAPITAL OF AMERICA 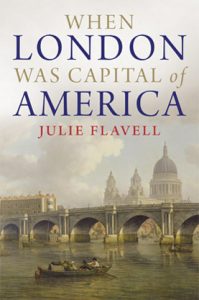 In this unique book, Julie Flavell brings to life a missing chapter of London’s history when it was the centre of an empire that stretched from North America to the West Indies and Africa.

Set in the momentous years just before American independence, When London Was Capital of America interweaves the stories of colonial American visitors to the city with the forgotten American features of Georgian London. Despite the conflict over colonial rights, London was experiencing its first big wave of American visitors.

No innocents abroad, the individuals whose stories are told here – an enterprising house slave from South Carolina, Ben Franklin in search of a second career, a plantation owner and his rebellious son, a Yankee merchant who almost became Lord Mayor, and a southern belle who found herself an unwed mother – vividly recreate a time when Americans saw London as their own, and London’s world view was being challenged by the influx of its exotic and multiracial fellow subjects from the New World.

When London Was Capital of America reminds us of the complex, multiracial – at times even decadent – nature of America’s colonial British heritage.

READ THE REVIEWS OF WHEN LONDON WAS CAPITAL OF AMERICA

BRITAIN AND AMERICA GO TO WAR: THE IMPACT OF WAR AND WARFARE IN ANGLO-AMERICA, 1754-1814 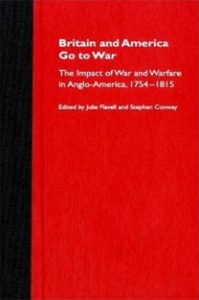 Nine leading historians of the new military history offer a fresh look at a critical period in the history of the Atlantic world. In a series of essays they examine the three major North American conflicts that disrupted the British Empire between 1754 and 1815: the Seven Years’ War, the American Revolution, and the War of 1812. Taken together, these wars helped to define the identity of each nation while transforming the entire English-speaking world. The essays in this collection explore the social and cultural impact of the three wars, while presenting them as part of a continuous struggle among Native Indians, Europeans, and colonists for control of North America, and the emergence of a new international order.

“Julie Flavell and Stephen Conway have edited an intriguing volume…Each essay has merit. Each is thoughtful and edifying, and some blaze new territory.” – John Ferling, American Historical Review, February 2006

“These essays show how warfare helped to shape the British-American world during the eighteenth and early nineteenth centuries…a very valuable collection.”  – Frank Cogliano,War in History, 2006

“A welcome overview of new scholarship and the debates circulating through the currents and winds of the Atlantic.”  – The Northern Mariner/Le marin du nord, July 2005

“..these essays …are important contributions to a discussion of the emerging Atlantic community in the early nineteenth century.” David Paul Nelson, The Journal of American History, 2005