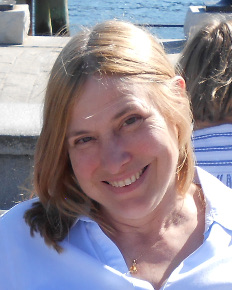 I was born in the United States and grew up in Massachusetts, where I acquired a life-long interest in the American Revolution. After graduating from Bryn Mawr College in Pennsylvania, I gained my PhD in history at University College London. I was elected a Fellow of the Royal Historical Society in 1999. I now live in Scotland with my husband, who is British. I have lectured in American history at Dundee and Edinburgh Universities, where I specialized in the Revolutionary era.

A lifetime spent toggling between America and the UK has led me to ponder exactly when and how Britons and Americans began to think of themselves as separate peoples. When London Was Capital of America explores the period just before the American Revolution through the experiences of individual colonists in London, and shows that Americans still saw themselves as British – and were seen as such in their capital city – right up to the start of the American Revolution.  But my book also reveals that America’s British heritage is not a simple story of Anglo-Saxon roots. Seen through London eyes, the American colonists were a very diverse people who came from all parts of the Eighteenth-century British empire, including Africa.

It was in quest of material for a sequel about London during the American Revolution that I came across the letters of Caroline Howe in the British Library.  Her life spanned two seminal wars for the birth of America, the Seven Years’ War in 1763 and the American Revolution just twelve years later. Caroline’s brothers became Anglo-American heroes in the first of these conflicts, but the second transformed them into foreigners in a land they had spilt their blood to defend. My latest book, The Howe Dynasty, tells the dramatic story of this family across four wars through the eyes of the Howe women, radically recasting the American War of Independence as a civil war.